Here are couple of snapshots on what you can expect out of the new Hotmail (codenamed “Kahuna” ): 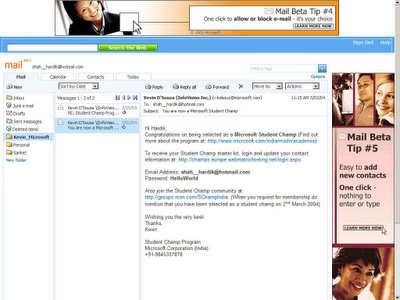 The first major change you will notice is the Three-Pane view, which is similar to your Outlook. Kahuna gives you a nice new feel with the light-blue theme along with the effect of Outlook which you might use in your day to day life. 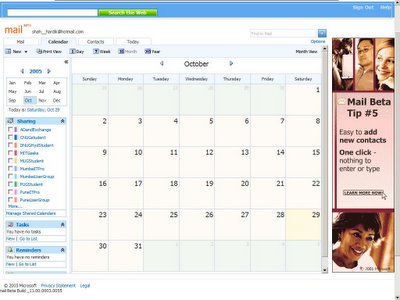 Again made on the lines of Outlook, the new spiced up calendar, makes it much more easier for you to share it across your friends. Along with this – it tightly integrates with your subscriptions to “MSN Groups” and keep you dates in sync with any events which are published on them. 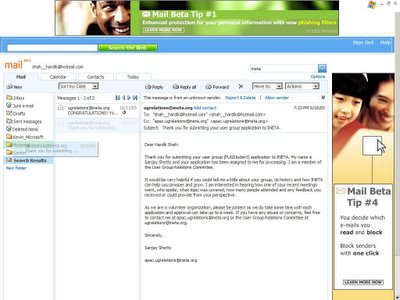 Another interesting feature is the Drag-Drop effect. Now you can move messages with just a click of your mouse 🙂 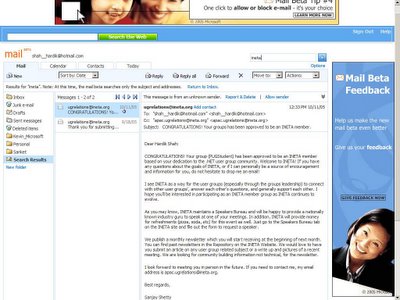 A new search feature helps you to search in the “Subject” of your emails. This later will be extended to full-text search within the contents of the email

Well, first thing I do in the morning is pop open my hotmail box!! And guess what came as a surprise today morning – an Invite to be a part of MAIL BETA!!

Yes, I’ve been signed up Big Kahuna, guess I got lucky here!! If you are looking around for invites and other stories related to Kahuna, keep an eye on Imran’s Blog.

BTW here are couple of things that I think I’m gonna tell my friends and ppl about Kahuna:

So for all of you who used to say – hotmail is bad cause its not as good as Gmail!! Well – here we have the Kahuna team – who can just prove you wrong. Posting up images of the Beta soon!!! Thanks a lot Kahuna team – for giving me the invite.

I have been lucky to get hold of Vista Beta 2 build (The one which was given away at PDC 2005). Have been on it for over a week now. There are quite a few improvements over Beta 1. Let me just brief here on some of them:

While loading up (booting) 5219, I could see a number of functional changes compared to Beta 1.
The most noticible one was of the Taskbar which was kinda translucent (heard of the Glass Effect or Aero Effect) – compared to an opaque black color in Beta 1–and more elegant looking.
Along with this – when you have “Similar Items Group’d Together” enabled – and just when you hover your mouse on the taskbar – you can see a small “preview” image of the window. This is one of the coolest features which got me into the grove of Vista

With build 5219, Microsoft reintroduced a complete new stack of Vista Sidebar (Yeah!! Microsoft does listen to its customers). I really had to found out how to enable it – cause it was disabled by default. Well the best part about the sidebar was that it supports RSS feeds – and I actually got all the RSS feeds from my blog on the sidebar (Now isnt this a cool feature!!)

The build (5219) was a of “Ultimate Edition”. Hence it came with Media Center Edition and also had Tablet PC platform support with it. The Media center was just rocking with nice sound effects and ability to pan/zoom into the images without coding for it :). I believe Microsoft will not have a separate editions of Tablet PC and MC for Vista. They will probably be a part of Ultimate Edition.

With “Ultimate Edition” came a lot more newer games with a great sleeky look. One of them which caught my eye was Chess aka Chess Titians. This one is a cool 3D version of the popular board game and you can play with various skill levels, using different board and piece designs, and against a computer or human opponent. Other ones included were Shanghai and Purple Place. Also the hot and classic windows games like FreeCell, Solitaire, Hearts and Spider Solitaire are included. The best thing about all of them is that they all come with a new ramped up icons.

One of the best features of 5219 was the ALT+TAB key combination which is used to switch between different tasks which are running on your system. With Vista, its been named as “Flip” and has changed to a more visual presentation, that previews the contents of each application’s window as you navigate through the list. 5219 also included a different kind of Task Switching called as “3D Flip” which can be instantiated by hitting Windows Key+Spacebar. When you start this one, task switching opens windows in a stacked, three-dimensional view. Guess this one is lifted wholeheartedly from Sun’s Project Looking Glass.

There was one more intersting feature that would catch any mobile user’s eyes, its called as “Super Fetch”. This feature examines your system on a timely basis, checks which applications you use regularly, and then preloads code from those apps to later speed application launch times and responsiveness. And here is a surprise for all of you who have a USB Stick and use it as their secondary memory. Stick in a 1 GB USB stick and you get 1 GB of super-fast cache RAM (encrypted for security) and an instant speed boost. Now isnt this feature intersting 😉

I couldnt get a chance to work on SafeDocs or UAP (User Account Protection) – will write more on them when I spend more time.

I have always wanted to use just one IM all these years. Jabber has always been around, however the UI of MSN or Yahoo is what keeps me stick to them. Finally two of the major players in the IM industry have heard me. This is what betanews.com says:

Microsoft and Yahoo announced on Wednesday a blockbuster interoperability deal that will reshape the landscape of the fragmented instant messaging market. The companies will connect their IM networks so users on each can communicate with one another using text and voice chat free of charge.

Does this mean that we might have an era where collaboration becomes the most important or is this an idea were advertisements will be put up so as to generate more revenue for the companies?

After a series of sessions on Tablet PC Development for the Academia as well as professionals, I would be doing a Community chat on Tablet PC API tomorrow. More details are available on the community chat website.

The next session will be at Pune on 15th for the UG meet. I’m planning to have session on Pocket PC and Embedded devices in comming months.

Well GMail rocked the email market with its first invite-only kind of 1GB email service. A lot has been changed from that day. Most of the email providers are now offering more space then ever before. And all this is FREE!!

Well here is another feather in such email providers. There is a new one floating called 30Gigs.com. This one offers 30GB of FREE email storage space. Yeah you heard it right 30 Gigs of email space. I dont think you will ever compain now of now having enough storage space.

I’ve 10 invites left with me – so incase you need an invite – kindly leave a comment on this post with your name and email address – and I’ll send you one. Remember its on first come first serve basis only 🙂