Star Wars is a massive hit across the globe. Well here comes a challenge to it – War of ICONS.

Shown above is a snapshot of junk email which I recently received in my MSN box. There was this message on the top of “From” about the sender not being verified by SenderID. Not knowing what this was all about, I was curious to get more information about this new Technology.

Bang I went, right to Microsoft’s Home page and a simple search led me to the results. So what is this SenderID?

The Sender ID Framework is an e-mail authentication technology protocol
that helps address the problem of spoofing and phishing by verifying the domain
name from which e-mail is sent. Sender ID validates the origin of e-mail by
verifying the IP address of the sender against the purported owner of the
sending domain.

Thats what Microsoft’s official page on SenderID had to say. Just wondering if this will save me from all the junk, crap and spam email that have been hovering around my inbox for a long time now. 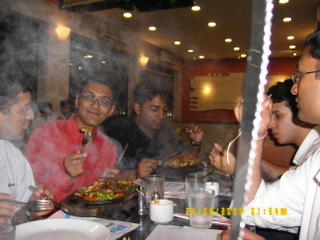 TechED not only ment technology, but also fun all the while. Having said that, after finishing the Technology part of TechEd, all of us would hop across places at Mumbai to Chill out. The first day of the evening was at Phoneix Mills Compound at Lower Parel. It was Nauzad’s idea to have sizzlers. He had an idea of Kobe Sizzlers, being in the compound. So we all were hooked up out there. This is the place where we get delicious sizzlers, a Bombay favorite. Burning hot metal platters piled high with fresh vegetables, fries, chicken or steak, and sauces arrive at your table wafting clouds of steam. The place was simple — no frills and a bit dark. However the only problem which some had was this place didn’t server alcohol, and people had to drink Coke.
So we reach Kobe at around 2100ish and have dinner till 2330ish. Having eaten lots of vegetables (read: sizzler), it was time for some coffee. 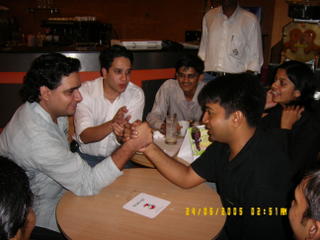 So came a idea from all – having a coffee at Barista (Ya!! You heard it right – 2330 hrs we go to have coffee). So we land up at Barista, most of us ordering coffee. All of a sudden, Mahesh and Dhaval come up with a brainwave to pay “Fists of Fury”. This seemed a great timepass and fun too – while the coffee was being prepared. The first ones were Abhishek and Nauzad. It was a pretty intersting match which ended up after after about 2 minutes. And yes, it was Nauzad who lost. This is what he said after loosing to Abhishek – “He is my MVP lead, and I’ve a year-end review comming up in August – so I better lose to him, then screw up my chances of becoming a MVP again“. And yes, after that came a huge applause and lots of laughter. 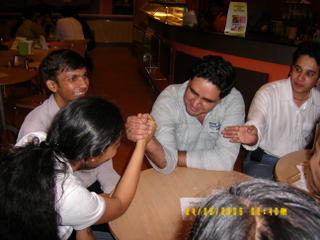 Not to be left behind, Namratha (the lady MVP in the group)said – if Abhishek can do it – so can I. So up came a challenge to Nauzad from Namratha. By this time, the coffees had been server and all of us were “heated up” for cheering them. And what a match it was, with Nauzad loosing to Namratha (ya, Nauzad lost to Namratha). Now here’s what he had to say after the second match – “Namratha is new in the community, recently being nominated as a MVP, and I did not want to take away her credits from Abhishek (who is the MVP lead), by winning. I’m always there for the community.” So it was all fun time that day and and then even more people got into this. You can view more of the photos from here. In and all it was great fun the first day of TechED. 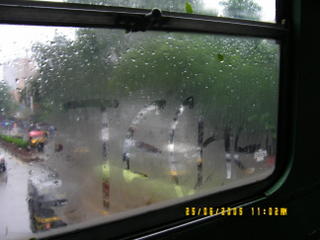 Finally, after one long month, the TechED leg of India was over on 2nd. I got a chance to be present at TechED Mumbai. It was fun-filled (along with the rains), technology crazy world for three days (still haven’t been able to come out of that TechED-lag). So it rained at TechED Mumbai, and it rained like never before. However, the delegates (who love technology) made it a point to be at the venue on time. So huge was the response – that Microsoft provided a transport facility for all the delegates who came from Pune. In and all – TechED was a massive Hit.

For this year, I was looking after two stalls at Mumbai.
1. TabletPC Stall
2. INETA Stall 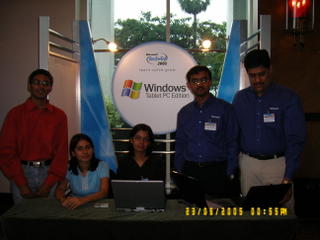 I would add that out of the two – the max time I spent was on the TabletPC stall. This was because I was more inlined to giving the demos on the various tablets kept for display. Top that with getting a chance to interact with two people from the TabletPC Team at Redmond, Subha Bhattachraya and Manoj Biswas. Both have a huge amount of knowledge as far as development in the Tablet Form Factor are concerned. It was really exciting out at Tablet Stall to demonstrate and prove that a Pen (read: Stylus) is always mightier then a sword. 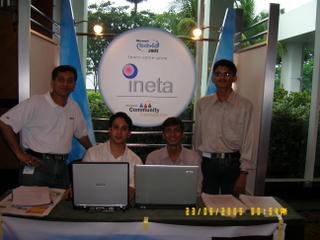 At INETA stall (what we also called it as “Community Stall”), talked about the evolution of Mumbai User Group and Pune User Group, and how to become a part of the respective UGs. TechED India also saw the Launch of “Community Times”, a newspaper for all people who want to know what’s happening in the community for them. Along with that, we also had a “DartBoard” for people to play games. 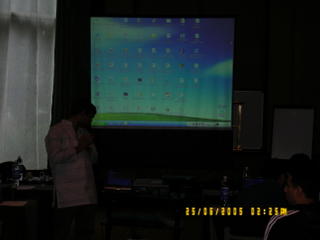 TechED this year, saw over 50 speakers from various backgrounds. This was also the first time TechED had 6 different tracks, including a special track for the Architects. However I personally felt that they did not attend the right kind of delegates. Infact it became all the more difficult to choose which track to attend :). The sessions (which were on for 2 full days), were followed by a day of HOL (Hands-on-Labs) sessions. Not to be left out – I got a opportunity to conduct one of the TabletPC sessions along with Manoj. Here, we just gave the delegates a basic know-how of Tablets, including the use of “Inking”, MS OneNote, Journal, Artex, and various other applications. This was the first time ever, that I was speaking at a HUGE Microsoft event.

This was also the year, where TechED launched the “Women in Technology Luncheon” – – a networking luncheon designed to facilitate one-on-one interaction between fellow women professionals from the industry! And what a time it was – all the women at one single place. (Just wondering how would the hotel staff, keep a check on the decibel levels :)). Lets hope to see something like “Men In Technology” in upcomming TechEDs

Overall TechED is usually considered as a time when most of the Evangelists come down to one place and have a gala of time. Having interacted with the likes of Abhishek, Manik, Vineet, Gaurav Khanna, Deepak Gulati, Tejas Shah, Ram, Ravi Sankar, Kevin D’Souza and many more, the memories of TechED are still fresh in my mind.

Waiting for a India leg of PDC.. Anyone listening??